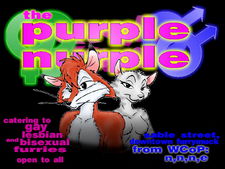 The Purple Nurple is a location on FurryMUCK.

Created by Slinky and Cargo, it was originally operated by Cargo and later Rigel for several years. After an extended series of controversies[clarify][citation needed] in 1999-2000, it was operated by Bohor until January 2006, when it returned to Rigel again.

"The Purple Nurple" was also the name and theme for several main dance events held at ConFurence, Anthrocon and Further Confusion from 1997 to 2000.[citation needed]

The Purple Nurple is a gay/lesbian/bisexual nightclub and meeting place, although straight people are welcome as well.

On FurryMUCK, it can be reached with the command t tpn.[clarify]