The Legion of the Headless Unicorn

From WikiFur, the furry encyclopedia.
Jump to: navigation, search
Culture > Awards > The Legion of the Headless Unicorn 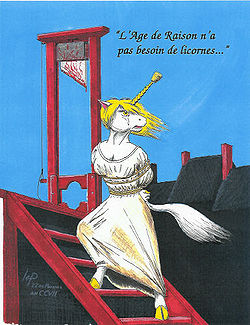 The idea was first suggested on the original Christian Furs mailing list, God's Creatures, hosted at that time at Catbox.com. The proposal -- including idea for an award/medal (featuring a severed unicorn head) and "roll of honor" on the Burned Furs website -- was simultaneously proposed on the (secret) Burned Furs mailing list, but never got further than the proposal stage.

The name is derived from a picture by Ken titled "The Age of Reason Has No Need of Unicorns", depicting a bound anthro unicorn mare facing the guillotine during the French Revolution. The picture premiered in the artshow at Anthrocon 1999 (Theme: "Join the Furry Revolution") and was captioned with its title in French, "L'Age de Raison n'a pas Besoin de Licornes". (A black-and-white preliminary of the picture also appeared in the Anthrocon program for that year; the original is currently in the collection of Vulpes Rex.)