The Fox and the Hound

From WikiFur, the furry encyclopedia.
Jump to: navigation, search
Culture > Movies > The Fox and the Hound 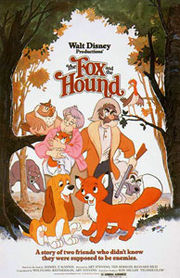 A promotional poster for the movie

The story revolves around Tod and Copper, a fox and a hound dog, who become the best of friends growing up together. But as they get older and older, their friendships starts to become increasingly burdened by what they are, a hunting dog and his prey. The situation isn't made any easier by the fact that Copper's owner hates Tod due to his stunts as a cub.