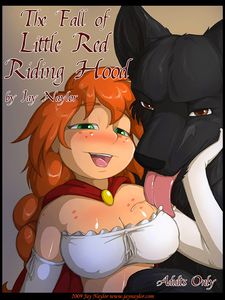 The Fall of Little Red Riding Hood is an adult comic by furry artist Jay Naylor.

Red is heading to her boyfriend, Pablo's house, to have sex with him. A wolf smells her scent and immediately becomes infatuated with her. Arriving at Pablo's house before Red does, the wolf ties him up and puts on his clothes, believing that Red would confuse him for Pablo.

Of course, she immediately recognizes the wolf, but has sex with him anyway. The second chapter involves Red and Pablo being initiated into the wolf tribe via lots of sex (in Pablo's case, he is turned into a form that wolves find more appealing). The wolves take over the world, initiating human women into their tribes, transforming male humans into shemales, and destroy the human race.