The Dark Wolf (born 1994 in Portland, Oregon), as he is most commonly referred to as, is a guitarist, video gamer and aspiring actor. He is multilingual.

He is portrayed as a wolf/bird hybrid, an entirely black-furred wolf with two tails, large feathered wings, black emo hair and a bite mark on his left ear. He is often depicted wearing clothing from the gothic/cyberpunk culture, including combat boots, black leather, chains and a spiked collar (as he is usually seen wearing). His eyes are a vibrant red color, with catlike pupils instead of the traditional round pupils. It is stated in his personal blog several times that his eyes enable him to see perfectly in the dark, which he thrives in, hence his name. The Dark Wolf is a vampire. 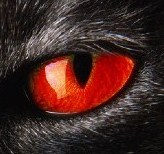 The Dark Wolf is a guitarist and has covered many songs, usually by metal or alternative artists, although he also enjoys aggrotech and industrial. His playing style is described as an effective fusion of metalcore and post-hardcore with R&B elements. His primary guitar is a Peavey limited edition model he calls 'The Vulture'. He uses Dunlop guitar effects and Line 6 amplifiers. As listed by himself, some of his favorite bands include Staind, Nine Inch Nails, Celldweller, Avenged Sevenfold, and others. He cites Trent Reznor as one of his personal heroes, along with Albert Wesker and Teru Mikami. He has claimed that hearing Tool's "10,000 Days" is what most inspired him to play music, and to this day, the album remains one of his largest influences.

The Dark Wolf is an avid gamer, although he claims that he does not play as much as he used to - beginning in September of 2009, his Xbox Live account went completely dormant, with no activity for nearly a year. However, as of September 21, 2010, he recently re-appeared on Xbox Live and is now playing again. He lists the Resident Evil and Mass Effect series as his favorite games of all time, along with Red Dead Redemption. It is known that he is a deadly sniper in Gears of War 2, however he prefers to use a shotgun in the Halo games.

In addition to playing the guitar, The Dark Wolf also writes fictional stories as a hobby. Several of his stories were leaked and posted to his GameSpot profile, although they may have been cleaned up or deleted since then. His writing is described as vibrant, brooding, and often with copious amounts of violence. He is working on a new story entitled "Rise of a Hero", a dark and highly stylized superhero drama set in an alternate version of Arizona circa 2014.