The Cricket in Times Square 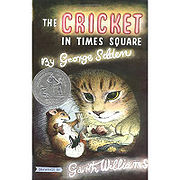 Front cover of The Cricket in Times Square.

The Cricket in Times Square is a novel by George Selden, illustrated by Garth Williams. It was first published in 1960. In October 1970, it was published as a Dell Yearling book with the ISBN 0440415632.[1] It won the Newberry Honor Award. The characters feature in later books by George Selden, including Tucker's Countryside, Harry Cat's Pet Puppy, Chester Cricket's Pigeon Ride and Harry Kitten and Tucker Mouse.

The story is based around Chester Cricket, a musically talented cricket who arrives in New York City on a train from Connecticut. He eventually makes his way to Times Square through a subway. Mario Bellini, whose parents run a financially struggling newsstand, finds Chester, takes him to the newsstand and wants to keep him as a pet. Mama Bellini is concerned that the cricket will bring bad luck, but Papa Bellini is more easy-going about the cricket's presence. At the newsstand, Chester meets Tucker Mouse and Harry Cat, who spend their time scrounging the city for food and other thrown away items. They show him Times Square, which Chester finds overwhelming. During the story, Chester reveals his musical chirping talent. Mario takes Chester to Chinatown, where he buys Chester a cricket cage from the Chinatown shop owner Sai Fong.

At one point, Chester accidentally eats two dollar bills from the newsstand cashier. Mama Bellini wants Chester to go, but Tucker gives part of his coin collection that he's collected from scrounging to save Chester and replace the money. Later on, more seriously, during a party that Chester, Harry and Tucker are having, they accidentally set fire to the newsstand. The fire is put out, but Mama Bellini is extremely angry and demands that Mario get rid of Chester, much to his dismay. However, at the right moment, Chester chirps Mama Bellini's favorite song, which she sings along to and which leads her to change her mind. It becomes clear that Chester has a perfect memory for music, as he chirps opera selections, which surprises Papa Bellini.

Later, Chester chirps classical music pieces and hymns for a music teacher, Mr. Smedley, the Bellini's best newsstand customer, who is impressed and writes a letter to the New York Times about it. This is printed in the newspaper, and brings attention to the newsstand when Chester starts playing concerts there. This causes the fortunes of the newsstand to turn around, and the Bellinis start selling their newspapers and magazines very well to the new crowds.

However, soon after, Chester becomes tired of the concerts and the attention. Mario senses that Chester has become unhappy, and says out loud that he wishes Chester hadn't come to the newsstand if he wasn't going to be happy. This makes Chester decide that he wants to return to the countryside. He tells Tucker and Harry this, and Tucker tries to convince Chester to stay. However, Harry says that Chester should do what he wants with his life and stop the concerts if he isn't happy.

With the advent of fall, Chester decides to go home to Connecticut. He gives a final concert that causes Times Square and blocks of New York City to fall still, with everyone stopping to listen to the music. Mario plays one last time with Chester at the newsstand after that last concert, and falls asleep after a while. Later that same night, after Chester gives a farewell chirp to Mario, Harry and Tucker take Chester to Grand Central Station so that Chester can hop on to a train. At Grand Central Station, they all say good-bye. Later, when Mario wakes up as his parents have returned, he realizes later that Chester has gone home, but accepts this by saying: "And I'm glad." The story ends with Tucker telling Harry that maybe they'll visit the country one day, "in Connecticut".

An animated movie, A Cricket in Times Square, was made.