The Chanterelle and May Life

From WikiFur, the furry encyclopedia.
Jump to: navigation, search
Culture > Fiction works > Comics > The Chanterelle and May Life 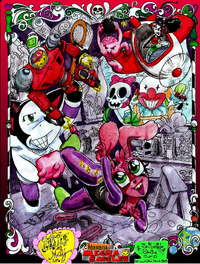 The Chanterelle and May Life is a webcomic about a cow and her adorable bunny best friend, who live in the grotesque, colorful Kingdom of Toxic Tampa Bay

The comic is updated weekly at Comicfury, and is typified by its gothic tone, over-the-top humor, and strong violence and gore. Chanterelle is a bit more mature than May, who is silly, oblivious, and who has an insatiable appetite for violence. They live with May's sister, Amy the pony, and are friends with Clownfish, a suicidal fish-clown, Joanne the rat, and Clarence, the skullbaby-turned-magic wand.

Together, they evade capture by the Eggettes, a sextet of evil aliens who believe them to be the enemies of the Antichrist. They are also frequently summoned by the Queen of Tampa Bay and sent on various missions against sorceresses, monsters, terrorists, and other. Blissfully unaware of the peril, Chanterelle and May inevitable emerge victorious from the blood-soaked affray.