The Bohemians was a furry web comic authored and drawn by Sophie Cabra. Inspired by the Broadway musical RENT, the web comic deals with many of the same social issues as the musical, including poverty, LGBT and HIV. The main characters are intended to be examples of Bohemianism.

In the comic's setting, species tends to be connected to gender - all males are canine and all females are feline. There is also a distinction made between Wild and Domesticated canines and felines, and species tension similar to real-world racial tension is hinted at. The comic contained mild violence and language.

The cast of The Bohemians (L to R): Jon, Val, Ally, Ethan, Travis, Sam and Meria

The three main characters — Ethan, Travis and Ally — are roommates in the same low-rent apartment. Much of the action takes place at or around the Moonlight Cafe, a lesbian bar and coffee shop that has just opened across the street.

22, Domestic canine, Labrador/Golden Retriever mix
Ethan is an aspiring Broadway playwright (and supposedly not very good at it). He also sings and plays the piano (and he's definitely NOT good at either). He wears glasses, and dresses arguably in a metrosexual fashion. This, combined with his chosen craft, have led to his roommates teasing him about being gay, even though he clearly has an attraction for the cats. He is single, and implied to be a virgin on top of that. He was born in Scarsdale, New York. 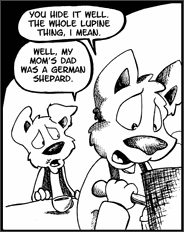 22, half-breed canine, wolf/German Shepherd mix
Travis is a grunge singer and guitarist with a soft heart. He and Ally have plenty of sexual tension between each other, but he perceives for a time that the reason they have not yet gotten involved is that she as an aversion from Wilds (he is half-Wild, his father being a wolf). His smooth music gets him a permanent gig at the Moonlight Cafe. He is straight, single and HIV-positive. He was born in Scarsdale, New York.

20, Domestic feline, orange American shorthair
Ally is the feisty female of the Bohemian trio. She is a dancer at the "Take It Off, Broadway" strip club. She is bisexual. She met her current girlfriend, Meria, when she shared a cab and found they were both going to the Moonlight Cafe; Ally to cool off after work, and Meria to start her first day at work. She was born in Miami, Florida.

24, Wild feline, cheetah
Meria is a shy, naive feline who just started working at the Moonlight Cafe, hired shortly after its opening. Not much is known about her yet. She is assumed to be a lesbian, as she has started dating Ally. She is an immigrant, born in Dosso, Niger.

29, Domestic canine, Boxer
"Jon" is locally known as the "Famous Gay Man of Alphabet City" due to his status as an NYU professor. He is friends with the main trio, and also in on the teasing of Ethan's sexual orientation. It is hinted he is single at the moment. He was born in Norfolk, Virginia.

53, Domestic feline, Norwegian forest cat
A serious hippie and Vietnam War protester in the 1970s, "Val" is now the proprietor of the Moonlight Cafe. She has quickly become a mother figure for the trio, always willing to dispense some advice. She is assumed to be a lesbian since the Moonlight Cafe is a lesbian bar. She dated Sam in college, but he cheated on her when they were engaged after graduating. She was born in Brooklyn, New York.

53, Domestic canine, Beagle
Sam is the local bum. He panhandles in front of the apartment building, but knows of the impoverished situation of the main characters, so he doesn't bother begging from them. He is believed to be wise, and is well-liked by residents of Alphabet City, though a sour past with Val makes him unwelcome inside Moonlight Cafe. He was a law student in college, but how he came to be destitute is a mystery. He was born in Crestmire, Vermont.