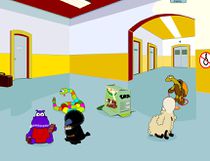 The game takes place in a clinic specialising in the treatment of plush toys. Filling in for Dr Kindermann, the clinic's director, the player is presented with five mentally disturbed soft-toy patients to treat.

For each patient, a menu of several different possible therapies is presented (including, amongst many others, dream analysis, paint therapy, a Rorschach test, or the administration of psychoactive drugs). Each treatment may either help the patient, or make their condition worse, and the player must find a combination of therapies that works and eventually leads the plush patient to sanity and a return to the outside world. As the therapy progresses, insights are revealed into what happened to the plush toy that caused them to end up at the Asylum.

The game is available in many languages: German, English, Italian, Spanish, Russian, and Korean. There are several mistakes in the translations to English. From the game's website, actual plush toys of all the patients can be purchased.