From WikiFur, the furry encyclopedia.
Jump to: navigation, search
Culture > Publications > Novels > The Architect of Sleep 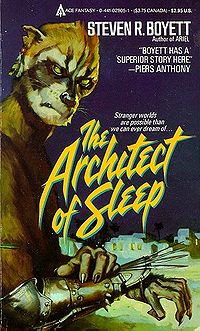 The Architect of Sleep is a novel by Steven R. Boyett. Published by Ace Books in 1986 with the ISBN 0441029051, it is listed on the author's website as an "Alternate-evolution" story where it is assumed that primates didn't make it, but raccoons did.

The first part of a projected trilogy; incomplete as published."[1] It details the travels of a man lost in a land of anthropomorphic animals, guided by a female raccoon]with whom he learns to communicate.

The Architect of Sleep was republished in July 2021 by Centipede Press, in a signed edition of 400. It includes the contents of the paperback novel and adds an afterword, new cover art, and some full-page black-and-white illustrations.

The Architect of Sleep and furry[edit]

Many furries consider this novel to be one of the staple original furry novels,[citation needed] but Boyett has put himself at some pain to distance himself from any such assertation.[citation needed]