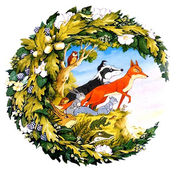 The Animals of Farthing Wood is an European Broadcasting Union cult classic[citation needed] cartoon based loosely off the books by Bristish writer Colin Dann about a group of woodland animals. The books were written between 1979 and 1994 while the first tv episode of the cartoon aired in 1993 and went on for three series.

The cartoon was imported to America in the form of a movie, Journey Home: The Animals of Farthing Wood. However, the story was that of the first television series, redubbed and edited. The fans of the series generally disliked the film.[citation needed]