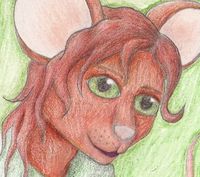 TheCurryMouse (also known as Curry Nezumi, or simply Curry)[1] is a costume maker from Mobile, Alabama, U.S.A.[2] Mainly dealing in sets of ears, tails, and paws, she has been moving her way up to suits and (as of August, 2010) has made two partials, & is currently working on her first full suit [3]. She also started the Fursuiters and Fursuit Makers group on Facebook, as well as the FX_Furs group on FurAffinity.

An example of Curry's ear/tail/paw sets

Commissioned set for a silver wolf

She has only been seen at local conventions, such as Rocket City FurMeet and Furry Weekend Atlanta.

As well as being a fursuiter and maker, she and JazzBat are collaborating to create a small techno band called Two CC's of Ink. She has also gotten into special effects work, making prosthetic pieces and applying makeup.