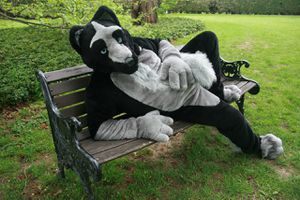 Thadius Effingham (born 1976) is a fursuiter and author who lives in Niagara Falls, Canada. Thadius first became aware of furry fandom in 1994, but believes he was "furry" long before that.

Thadius has made fursuits for himself and his wife Beckaroo. His furry persona is a grey and black wolf. Thad is also a writer. Thad's first book, Frenetic Ramblings of a Furry Madman, was self-published in 2010. The book is a collection of short stories and essays. Thad printed and handbound each book himself. In 2011, a copy of this book sold at the Condition: Red charity auction for $2000.

Thad is founder of Effingham Productions, through which he takes commissions for fursuit construction and freelance writing.

In 2011, Thad and Beckaroo appeared in the Furry episode of Fanboy Confessional, talking about fandom and the experience of wearing a fursuit.

Thad hosts and organizes many events in the Niagara region, under the name NAG, or the Niagara Anthros Group. Each year, Thad hosts a charity-raising event for local furries. Funds are donated to cancer research. In 2010 the event raised $450 CDN for the Canadian Cancer Society. This year, the planned event will donate funds to the Rankin Cancer Run.

Thadius has been an panelist at a number of conventions, including:

Thad is the staff writer for Condition and his writings appear in conbooks for Furnal Equinox 2011, Feral! 2011, Condition: Zero Hour and Condition: Blue.

Frenetic Ramblings of a Furry Madman is a collection of short stories and essays. The book was self-published in 2010, with each copy being printed and handbound personally by the author. A copy of the book sold at the Condition: Red charity auction for $2000, in Aug. 2011.