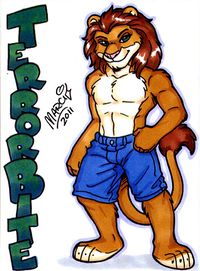 TerrorBite is an Australian fur. He was mated to Snooper from 2007 until late 2012.

TerrorBite's fursona is an anthropomorphic lion with tan fur and pure white underfur.

TerrorBite is an active member of Furnet IRC. He can also be found on Fur Affinity, Furstralia, and various other websites and communities both furry and otherwise.

TerrorBite has not yet attended any international furry events.