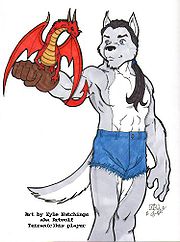 Teiran (born March 18th, 1982) is a gay male furry writer and is mated to FuzzWolf. His character is a grey wolf with a long, black ponytail. He is often depicted with a small, red shoulder dragon. Teiran sometimes has a stuffed dragon toy on his shoulder at conventions.

Teiran has been writing furry stories for several years as of 2007. His early story series include Fun at the Mall and Gryphon Thief. His series High School Days is on Yiffstar.

Teiran published his first book, The Hero, in 2007, through Bad Dog Books.[1]

He is the conbook staff-member for Furry Fiesta.