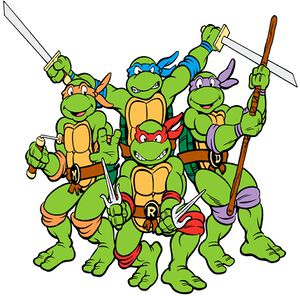 Teenage Mutant Ninja Turtles is a multimedia empire that has existed since the mid-1980s. Originally a 'gritty' comic book, the comic book has inspired a generation, with multiple television shows (a cartoon, two anime, and a live-action version), a roleplaying game, four movies, and more toys than you can shake a Pokémon at. In 1990, they even went on a musical concert tour Coming Out of Their Shells, trading their weapons for musical instruments.

The comic was created by Kevin Eastman and Peter Laird in 1984. Mr. Laird was a Guest of Honor at Anthrocon 2005.

The titular Teenage Mutant Ninja Turtles are a group of four turtles named after their master's favorite Renaissance artists - Michelangelo, Leonardo, Raphael, and Donatello - who, after attaining anthropomorphic forms and human-level intelligence from a mutagenic 'ooze', and ethics and moral, not to mention ninja training, from their rat "sensei," Splinter (who has multiple origin stories, depending on the story in question), the Teenage Mutant Ninja Turtles must deal with the evil Foot clan, alien empires, mad scientists, time travellers (both from past and future), and other weirdness.

The Teenage Mutant Ninja Turtles are probably the most popular scalie characters out there, especially their 2003 and 2012 cartoon versions.