From WikiFur, the furry encyclopedia.
Jump to: navigation, search
Community > People > Techno C. Procyon
Techno C. Procyon, also known as (the) ROBOCOON, was a cartoonist, painter, and musician. Their primary influence was within the anthroid and postfurry movements. 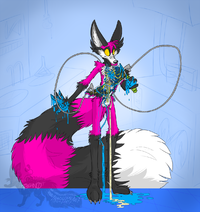