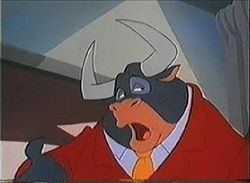 Taurus Bulba was a villain seen in the Disney animated television show Darkwing Duck. He was a very large, muscular bull with dark purple fur most often seen in expensive business suits, and his henchmen were all different types of hoofed mammals. His name was a play on that of Taras Bulba, a character from The Nose by Nikolai Gogol. In all three of the episodes he appeared in, Bulba's voice was provided by British actor Tim Curry.

Bulba appeared as the primary antagonist of the two-part pilot movie, Darkly Dawns the Duck, at the end of which he was seemingly killed in an explosion. The series' most ruthless and evil villain, Bulba was responsible for the death of Darkwing's adopted daughter Gosalyn's grandfather, Professor Waddlemeyer, whom he killed for his invention, an anti-gravity beam gun called the Ram Rod. He later returned however in the episode Steerminator where he was rebuilt into a cyborg by FOWL and sought revenge against Darkwing for his requiring mechanical components to live. But since the series was cancelled shortly after Steerminator aired, Bulba, despite escaping at the end of the episode and vowing to return, never made good on his promise (even though a fourth episode was planned with him).

As mentioned above, Bulba was a unique villain to Darkwing Duck. Except for one scene in which he mocks Darkwing by comically imitating his various heroic poses, and a couple of jokes at the expense of his newly robotic nature later on, Bulba was never played for laughs. He was a surprisingly dark and menacing character of the kind usually only reserved for theatrical Disney films. And unlike Negaduck, who claimed the title of Darkwing's arch-enemy, Bulba was actually a critical character who had an enormous impact on Darkwing through his actions in the first two episodes: not only did defeating Bulba jumpstart Darkwing's career as a crimefighter, but had it not been for him, Darkwing would have never met Gosalyn or Launchpad: Darkwing rescued Gosalyn from Bulba's clutches, and it was through chasing Bulba's three henchmen Hammerhead, Hoof and Mouth that he first met Launchpad.

Regardless, Bulba has been mostly forgotten by fans of both the series and furry cartoons in generally, and he features only sporadically in artwork and stories.