"Lord Mannoroth", a taursuit by Shaggy Griffon. Notice the small wheels under the paws of the secondary hind legs.

A taursuit or taur suit is a type of fursuit which possesses limb extensions beyond the typical four-limb (or two-arm, two-leg) fursuits which are usually displayed; usually, taursuits involve four legs with two arms, akin to the fictional centaur, chakat or other taur characters in both mythological and modern fiction media. 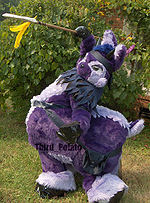 Dark Ixi Spearman, constructed by Fyuvix, and only worn once, at Otakon 2006[1].

Movement-autonomous secondary hindlegs are much harder to construct or accomplish, with suggested solutions going so far as animatronics or pneumatics to accomplish the construction of secondary hindlegs which can be controlled by the wearer rather than by an indirect control through another body part.