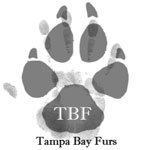 Tampa Bay Furs, also known as TBF, is a group of furry fans located in the Tampa Bay region of Florida.

TBF was founded by Kito Soma on January 15th, 2009. It was a sister group to OFURS (based in Orlando, Florida and ran by Blaze Darkarma). The group communicated primarily through Yahoo Groups Mailing Lists and through Furspace. The mailing lists used by TBF contained three levels of users:

(Anyone who had joined TBF)

(Anyone who had joined TBF (Google Groups)

The group appears to have moved to Telegram and Facebook as Google Groups is now a defunct service.