Tales of the Questor

Tales of the Questor or TOTQ is a furry webcomic by Ralph Hayes, Jr., who is also the creator of Nip and Tuck and Goblin Hollow. 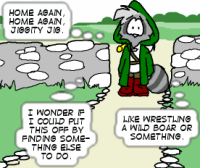 Quentyn hesitates before returning home after the Tumbledowns fiasco

The comic tells the story of Quentyn, a young 'Rac Conan Daimh' (a race of anthropomorphic raccoons) who grows up as a farmer's son in the land of the Seven Villages, a place set in pseudo-medieval times. The Rac Conan Daimh wield a power called Lux which gives them magical abilities such as telekinesis. As a result of abusing this power and misunderstandings between them and the other races in their world, the Rac Conan Daimh have isolated themselves behind a wall of impenetrable mists and swamps. Quentyn has almost no Lux power himself, which leaves him in an awkward position in his community.

Enchanted by the stories he reads of the adventuresome Questors, and disenchanted by his own potentially dismal future, he aspires to live up to the heroism of the characters he idolizes. This is not immediately welcomed by his community, as they haven't needed anyone to fill the office of Questor for well over a century. However, he receives encouragement from a magical white stag who appears to him while he is contemplating his future. Armed with a malfunctioning magic sword - the result of drunkenly stumbling into a wizard's workshop one night - he goes off in search of his future.

Assisted by the wizard Rillcreek and his friend Kestrel, he tries to figure out the nature of both his unpredictable weapon and his adventures.

The first two compilations of Questor comics are available to buyers on Lulu. Volume 1 is 223 pages long, and costs $41.99. It was awarded the 2005 Ursa Major Award for Best Anthropomorphic Other Literary Work. Volume 2 is 170 pages long, priced at $39.99.