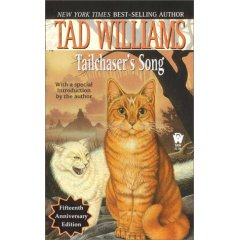 Tailchaser's Song is a novel written by Tad Williams and was first published in November 1985, by DAW books.

The novel is set in the world as cats see it, with Man being a mysterious and distrusted creature in the eyes of feral cats. Contrary to the opinions of others, the cats, or the Folk, as they call themselves, are not the dominant lifeform on the planet. The novel takes the approach that all creatures consider their kind to be the dominant species of the planet. With this premise, Tad Williams tells his tale of fantasy adventure and heroic bravery.

The main character, Fritti Tailchaser, becomes concerned when other cats, including his best female friend Hushpad, have disappeared, sometimes under dark and mysterious circumstances. He embarks on a quest to find her and to solve the mystery. He is accompanied by a kitten named Pouncequick and meets various other characters, including Roofshadow, a female who helps care for Pouncequick when he is not well; Eatbugs, an eccentric old tom; and numerous others. His quest takes him to some interesting and some very dark places before it is over.