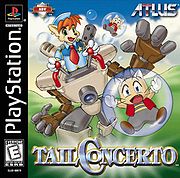 Tail Concerto is a furry game for the Playstation, released in Japan in 1998 by Bandai and in the USA in 1999 by Atlus. It is the predecessor to Solatorobo in the Little Tail Bronx series.

The story occurs in the Kingdom of Prairie (Country of Meadow), a kingdom made up of islands floating in the air, and populated by 30 000 Dog-People (he and she-dogs) and 3 000 Cat-People (he and she-cats). It was a peaceful kingdom until the day when a group called the "Black Cats Gang" attacked one of the islands, Resaca. Waffle, a police officer of the kingdom, is called away from his vacation to go investigate and prevent the "Black Cats Gang" from destroying everything.

Waffle is a dog working for the police. He is smart, brave, and always looking to help - qualities that make him a great addition to the Prairie police force and a ladies man to boot. Even though his job may command otherwise, he's always looking to do what's right in a situation, even if it means endangering himself. He's working hard toward a well-deserved vacation.

Russell is Waffle's grandfather, who studies artifacts and the world left behind by the ancient civilization. He is very intelligent but wishes Waffle had followed in his footsteps and taken on his life's work.

This adorable little pup carries a communications radio on his back. He's always looking to help Officer Waffle, although his small size tends to get in the way.

The police chief may seem like a tough guy, but he's a soft one deep down. He gives Waffle new missions and updates from time to time.

Alicia is the leader of the Kuroneko-dan (Black Cats Gang). With a hatred for all dogs, she wants to collect five artifact jewels that will help her to build a homeland for all the cats. Unfortunately for her, she doesn't know the full story behind these crystals, and her emotions sometimes get in her way.

Alicia's sister is the quiet type. Her interests lie in the well-being of her sisters.

Flare is the adopted sister of Alicia and Stare. Young and hyper, she looks up to Alicia and follows whatever she believes.

Tons of kittens swarm the islands of Prairie making mischief and hunting for crystals. Some of them have bombs or dangerous aircrafts.

Fool is a weapons merchant who also deals in illegal relics. He wants the Priss sisters to find him the five crystals scattered about the land so he can resurrect an ancient evil that he wants to use to take over the land.

Terria (Terrier) is not the average quiet princess. She wants to go on an adventure, much to the dismay of her escort. After she is rescued by Waffle, she grows feelings for him

Terria's old escort is stressed as ever. He can't keep up with the young princess, especially when she is wandering off unattended or being kidnapped.

The king, and Terria's father.

Cyan is the obnoxious captain of the palace guards. He thinks very higly of himself and his abilities, but most of the time he can't put his money where his mouth is. He loves Terria, which leaves him in competition with Waffle for her affections - a competition Waffle doesn't want part of.

Gray is Cyan's grandfather who has a bitter ongoing rivalry with Russell. He lives in the high northern island of Coolant where he studies frozen life forms.

Tetsukyoushin (Iron God Machine, renamed Iron Giant in the US version) is an ancient creation powered by the five crystals. It's destructive rampage was put to an end when the crystals were removed from it's heart, and his limbs scattered. Now Fool is out to resurrect him, not knowing even he can't control the giant...

The developer, CyberConnect2, has a plan of merging another title- "Mamoru-kun" which the story takes place in the "Country of Nipon" (not "Nippon" meaning Japan) with "Tail Concerto" in "Kingdom of Prairie", into a unity called "Little Tail Bronx" (bronx means borough?). However, there only seems to be a geographical connection between the two, as Mamoru-kun is not the sequel of Tail Concerto...