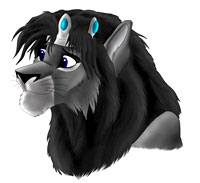 King Taibu (Christoph Kellner), the elvish grey lion, is a fursuiter and musician living in Austria. He is very interested into music (especially metal) and is a bass player, who already played in several bands (furry and non furry). He also composes songs in his free time. He is also the brother of TaniDaReal.

Taibu has a tattoo of his lion character on his right arm since January 2006 and is married to his lioness Kimani.

King Aslan Taibu's fursona is a grey elvish lion with pointed ears, black mane and a white dorsal stripe. "Taibu" means "who does good" and he is active in spiritual things and a mentor to others. His character is often shown with a silver crown, which has a spiritual background.

Taibu is very idealistic. He loves to create things, and sometimes tends to get obsessed by them. He fights for his ideas and goals with lots of power. He stands for his friends, but also his projects, and has no problem to spend lots of time for them. Taibu is a friend you always can count on. If somebody makes fun about him, or tries to attack his goals, he can get very angry. If something like that happens he has no problem to set things back the right way. One of the things Taibu hates the most is superficiality. People who only talk but don't do anything get him angry. On the other hand he loves people who also work for the creation and he tries to support these people as much as he can. Unfortunately - or luckily - he never forgets something. If things go wrong, he tries to learn from it, so it won't happen again. People who look deeper will see that Taibu is a natural leader and if they let them he will give all he has to help everybody. He will never let those he cares about go into a situation which will bring them problems or pain.

Taibu already created and built several fursuits, both of his own and other characters (a dog, a wolf, and two versions of Taibu the lion).

He also has made a video showing his lion suit in "action" Taibu Video.

Taibu was part of Heather Alexander's German furry band at Eurofurence 11 and Eurofurence 12 in Nuremberg as bass player. The band got reunited and performed the live band at the German F8K-tv event in winter 2005 in Kettwig.

Taibu was the administrator of the Furry map of Austria, which he discontinued in favor of FurryMap and hosts the sporadic Roaring Radio, a furry webcast radio with an emphasis on heavy metal music.

The kinglion FurNet IRC server, which belongs to Taibu, is one of the five servers furnet is running on. Taibu joined the FurNet team in 2004.

In December 2006, he did the Soundtrack for Dolphys Fruity Bird.