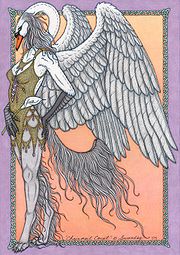 Swandog (real name Xenia Eliassen), is a fantasy and furry artist living near Oslo, Norway. Born and raised a Texan, she has been a lifelong furry, otherkin, and therian, having encountered them upon joining the furry fandom in 2001. She is married to Sayh and is a mother to two sons and two cats.

Like her husband, Swandog is a furry lifestyler and is relatively active in the fandom, but being rather shy, she sticks to small groups of online and local friends. She is also a fursuiter, having commissioned a Swandog head from ScribbleFox of One Fur All, and in 2008, she commissioned a full Lunacorn fursuit from Beetlecat Originals.

Swandog runs the Norwegian Paws, Eurofurs, Fursonals and FurryReaders LiveJournal communities as well as TheDivineCervine group on deviantART. She occasionally attends Anthrocon. Closer to home, she hosts furmeets like CabinCon, and was involved with attempts to setup a local convention, ScandinAviary.

Swandog's personal furry/fursona since the late 1980's has been a gryphon; it originally was a bald eagle/wolf mix, which she hinted at in her "self portrait", drawn in 1988. This gradually evolved into "Swandog", the swan/saluki gryphon, which she chose due to her passion for swans and salukis (her totem animals), and also because being a predator (a bird of prey) never quite suited her, in spite of her gryphon obsession.

In addition to gryphons, Swandog has always shared a deep bond with deer-like unicorns, and to a lesser extent, luna moths, which she kept relatively secret for years. In 2005, she published a mandala reflecting these aspects, and in mid-2008 she unveiled her new "Lunacorn" otherkin fursona - a hybrid, deer-based, unicorn/luna moth, which is an entirely separate form--yet is complimentary to--her Swandog fursona.