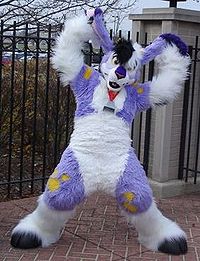 Sophie Cabra is an artist and fursuiter from Orlando, Florida. Her fursona is a purple goat. She also has a secondary fursona, a bengal tabby female cat called Sophie Gata.

Sophie created The Bohemians, a comic which ran from August 2004 to mid-2006. Her graphic novel Caterwall is to be published by Sofawolf Press, in September 2014 it is expected to be published in 2015.