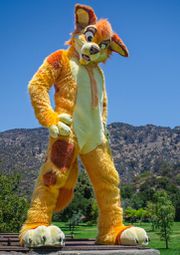 Sunny Dingo is a fursuiter based in Sunnyvale, California[1] His fursona is a bright yellow dingo, his name and colours inspired by the citrus beverage SunnyD[2]. He was "born" on 14 February 2015, built by MadeFurYou[3]. Sunny started posting fursuit photos with positive messages on his Twitter, then first speaking on Vine[4], appeared on the Funday PawPet Show[5] and has been featured in a few YouTube interviews by Majira[6] and Sniper Wuff[7]. Through 2016, he has been on walkabout in the States from Melbourne (Florida)[8] to Brisbane (California)[9], before going on Australian walkabout, visiting Melbourne[10], Sydney[11], and attending FurDU 2017[12].