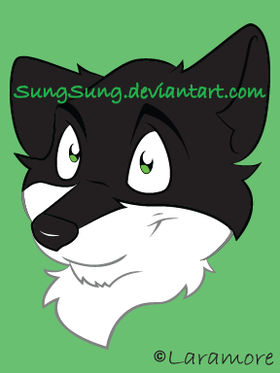 SungSung is the alias used by Experimental Vector Cartoonist, Grayson A.C. Laramore. His only current online gallery is on deviantArt. SungSung originally had no interest in being an artist, despite both his brother and father, and most of his other family being artists. But, after discovering the cover of the magazine Huzzah done by artist Scott A.H. Ruggels

Then, on April 20, 2002 his friend saw the picture and asked him to draw a picture to commemorate 4/20. Though it was extremely shoddy, SungSung liked the piece and decided to start drawing.

It was quite a while before he discovered the fur fandom. Even today, he considers himself an 'outsider' to the fandom, even though his interaction with members of the fandom have increased.

On December 1, 2005, he got a DeviantArt account after looking at Little Blue Wolf's account there. And he remains very active there.

Apart from his cartoon drawings he also keeps up with other artforms; such as Photography, writing, blacksmithing, carpentry, gunsmithing, vocal acting, singing, and revolver spinning.