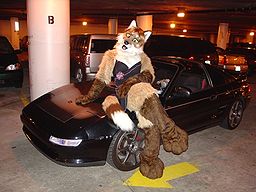 Summer Vixen posing on a friend's car at Anthrocon 2006

Summer Vixen at the Critterlympics of Further Confusion 2006.

Summer Vixen is a golden fox character created by Autumnfox in late 2005, an evolution of her Second Life character. Summer was given form as a fursuit (also owned by Autumnfox) created by Latin Vixen and ScribbleFox, which premiered at Further Confusion 2006.

Summer Vixen appears as a gold-colored variation of a red fox, with white spots above and below her eyes. Her paws are brown rather than black, her pawpads pink. A rarity among female characters, she also has digitigrade legs, giving her a somewhat less morphic appearance. Her hair is medium-length, blonde with red highlights. She stands about 5'6" (1.68m) tall, weight unknown. Age-wise, she appears to be in her late teens or early twenties.

Although Summer usually wears clothing, she does on rare occasion go without. Her favorite colors are black and pink, and her clothing often utilizes such colors. She always wears a bow at the base of her tail, usually pink, but sometimes purple. She never developed much interest in makeup.

Summer is a generally bubbly character, bouncy and innocent, though she does have a flirty nature. While she often acts very feminine, she also can be very much a tomboy. She is especially protective of her friends.

Summer is very curious about this world she's found herself in, still trying to figure out where she's supposed to be, but having fun all the while. She exemplifies the season of summer, with high hopes and energy, courage and passion.

While Summer can be shy, and often does act very coy when receiving complements or gifts, she does have a rather assertive nature. Whereas many foxes might often be described as submissive, she's more of a take-charge kind of person. She sets a goal, and never gives up until she achieves it.

Summer is not quite sure where she came from. In her mind, she just appeared on Autumnfox's doorstep one day, and the two have been fast friends ever since. Much of her life so far has been exploring herself, trying to find her place in this world, all the while working toward unraveling the mystery that is her creation.

Of particular interest, she feels a strong connection with actual foxes, and sometimes relates to the world around her with a somewhat feral mindset. However, she also realizes that she's not like regular foxes, and this dichotomy between herself, partly in the human world and partly in the fox world, is one that she often struggles with.

While not presently with gainful employment, Summer is exploring various human professions to figure out what she would enjoy doing. Currently, her more professional interests include nursing, ballet, and auto repair, however she's also considering studying up on business and law.

As far as hobbies go, Summer has a strong interest in outdoor activities, such as hiking, swimming, volleyball and soccer. She also enjoys cuddling up with friends while watching movies, and taking long walks on the beach. She'd also love to find a car to work on, as she's interested in fiddling with engines and other mechanical devices.

In addition, Summer has attended various charity events with the New England Fursuiters, helping to raise over $5000 for animal and children related charities.