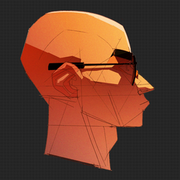 Reagan Lodge was raised near the Pala Indian Reservation in Southern California. After attending the California State Summer School for the Arts (CSSSA) for animation in 2002, he became a self-employed illustrator. He's is a member of the Antiochian Orthodox Christian church.[2]

Reagan is the artist behind WYIT, a Dieselpunk/Fantasy graphic novel about "a boy marked for death and a rogue soldier, finding friendship and redemption in a dark world".

Reagan has also done artwork for Avatar: The Last Airbender - The Lost Adventures.[3]

Reagan is the author of The Dragon, a short story in the fifth volume of The Flight books comics anthology, published in July 2008.

In February 2020, Reagan Lodge was exposed as a former member of the defunct Neo-Nazi forum, Iron March,[4] for which he later apologized for on a couple Twitter posts.[5][6]