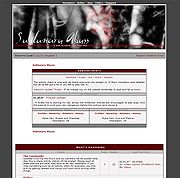 Sublunary Abyss is a forum-based roleplaying group. There are three wolf packs: Sublunary Abyss, Aphotic Eclipse, and Ephermeral Infinity. It opened around 2002 or 2003, and has had periods of dormancy as well as site changes. It re-opened in June 2006.

Sublunary Abyss considers itself a realistic roleplay, but less so when it comes to the intelligence of wolves. As is a general rule in roleplay, the wolves portrayed possess the ability to talk and more or less possess intelligence close to that of a human. Fantasy elements such as wings and unnatural colors are prohibited. Character backstories generally need to conform to some standard of realism and tales of wolves abandoned in their infancy (and similarly improbable events) are not allowed.

Sublunary Abyss was founded by a male wolf named Muerto, a day after he had been beaten and partially blinded by his half-brother, who promised Muerto's death. Not long after the pack was established it began to attract wolves, some of which stuck around, some of which left. This was a stressful time and the influx of new wolves did not help. However, everything seemed to be going smoothly until a wolf called Hoshiko came to the cadre's territory in search of acceptance. She was the current Beta male's sister, and so was accepted without second thought. It came as a surprise to everyone - mostly Akemi, the Beta male - when the wolf led a surprise attack on Sublunary Abyss. The war lasted only a short while due to the small amount of wolves involved and Sublunary Abyss came out victorious.

Not long after the war ended the pack was stricken with more drama, this time in the form of humans. They had settled not far from the packlands, and captured the pack's protector (a female by the name of Villa). Muerto was quick to act and did manage to free her, though the instinctual fear of humans made it difficult. During their journey back to the pack's territory Muerto spoke with her about conceiving his children. The sudden urge to produce young was brought on by insanity and paranoia and the recent death of both his father and half brother. Villa agreed, and soon they had four pups.

Muerto and Villa weren't the only ones to produce offspring that season. Another wolf called Devaki had pups with a wolf called Dane, and before the season was over Muerto mated with another wolf called Chacotee. They had two pups who became rivals with Muerto's previous litter. Soon a love triangle developed between Muerto, Chacotee and Villa. Chacotee was his rightful mate but Villa was in love with him. After demoting Chacotee from Alpha to Hunter, Muerto finally decided that Chacotee was the one he truly loved and once again promoted her. In the end Villa disappeared and Muerto and Chacotee were left together.

Soon, trouble began to shake the pack once more. It had been three or four years since it had been founded. Muerto disappeared several times. Once, the pack dispersed to an ally, only to be dragged back by their rightful Alpha once he showed up. After returning, the war of Muerto's Succession began. Two brothers gained many allies in hopes of being promoted to the rank of Alpha heir. After the death of one of them, the rank was given to Sin. The same day the rank was given, Muerto and the ill Chacotee stepped down from their high and mighty Alpha ranks.

Sin wasn't Alpha for more than a few moments before he began changing the rules. However, the pack, loyal to Muerto and Chacotee, soon dispersed and left him alone. Before this happened Sin managed to rape and impregnate one of his sisters who had taken his brother's side in the fight for the alpha position, which only came back to haunt him. Leaving his father's legacy to start his own, Sin founded Forsaken Dominion.

As the pack grew, it began to seem like a clone of the old pack. The game was the same, but the players were different. The only difference was, game rules no longer exist.

With new members to follow him, Sin had grown increasingly conceited and self-centered. Within the first year, several new wolves came and went, which is something that can be expected with a new pack. No one truly knew the pack's potential, and few bother to find out. Several wolves did take up permanent residence, however. Ada Verkado was one of these wolves. Not long after acceptance the female was offered the opportunity to carry Sin's pups. He was truly his fathers son. Another of the wolves was Kaden Vasenthous, Sin's own blood brother. He didn't know this wolf was accepted, however, for the two didn't really get along. Several other siblings came to join as well; Mai and Shizuka - both litter mates whom Sin could stand. Shizuka came with several young nephews and nieces, though they soon disappeared, much to Sin's discontent.

More new lives began to prosper in the territory. Ataxia came with her and Sin's offspring. The pups were nine or ten months old when they arrived. Sin accepted them reluctantly. They proved to be an interesting group. Arieche ended up stalking off after a dispute with his mother, Yew was attacked soon after arriving, Alrezactai was just plain weird. Citadael was the wolf Sin chose to take under his wing. She was a quiet female whom he took quite a liking to. Ada soon brought a few more new lives into the world, though only she and Sin knew of the pups sire. He soon chose Agamemnon to take under his wing from this litter.

Peace was once again shaken up with the arrival of Sin's parents, the former Alphas of Sublunary Abyss. Chacotee especially hated Sin, and he held a grudge on her for blinding him in one eye. Sin accepted the pair reluctantly, giving the wolves the lowly rank of elderly, warning Chacotee and Muerto not to step a toe over the line.

It wasn't long before more new arrivals threw the pack into turmoil. Verlassen, a sarcastic, cold female arrived, and Sin and she immediately clashed. While Sin was dealing with Verlassen, Chacotee showed up. Chacotee refused to submit to Sin, which he believed undermined his authority in front of Verlassen, so he attacked Chacotee. Verlassen, who decided she liked Chacotee right at that moment, attacked Sin. The two females defeated Sin and drove him off the land. Verlassen was established as the new Alpha of the pack. She was quick to accept her tag-along younger brother, Traurig, into the pack as well. Along with the new Alpha came a few new rules and a foreign hierarchy system. The new hierarchy system and rules were adopted by the canines of the Dominion, no other choice given.

Verlassen's leadership was not accepted by all. Several wolves, with Agamemnon as a leader, broke off from the main pack and formed their own rebel pack. They had claimed a small portion of the pack, but lack of new members and the dying land was cause for both packs' demise.

With Sin/Verlassen's pack dispersed, Muerto and Chacotee had nowhere to go. They decided to head back to the place they used to call home; that they used to rule over. Though the two were getting old, dying as an Alpha would be better than dying a wandering rogue. They both still had some fight left in them, and both had stubborn, dominant personalities to overthrow physical ailments.

They reclaimed Sublunary Abyss, though the land had changed quite a bit from the original days. They claimed a much larger area than even Forsaken Dominion had been.