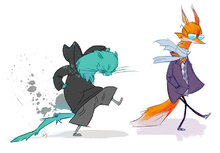 The Studio Killers are a group of music producers who make electropop which was founded in 2011 and composed of the fictional characters Goldie Foxx, Dyna Mink, Cherry, and the manager, Bipolar Bear. The actual identities of the members are unknown, however Finnish artist and animator Eliza Jäppinen is the official character designer. Although every member of the group (except Cherry) are represented as anthropomorphic animals, the group is not directly associated with the furry subculture. Goldie Foxx and Dyna Mink are portrayed as the group's frontmen, taking turns "writing" updates on the official Facebook and Tumblr page.

The group debuted with the single Ode the the Bouncer on March 12, 2012[1],gaining popularity with the music video featuring the three members; the single was hugely successful in Denmark, Finland, and the Netherlands. After three more singles released in 2012, the first self-titled Studio Killers album was released on June 14, 2013 through the Studio Killers Records label (distributed by Spinning Records in the United States).

In 2014 the Studio Killers appeared in a series of live concerts starting from the Ruisrock festival in Finland: to finance it, a special crowfunding campaign was opened on Kickstarter of 50 thousand pounds, successfully achieved on June 14, 2014[2]. On stage, Goldie Foxx and Dyna Mink "appeared" on stage wearing masks depicting their characters[3], while Cherry was made on the computer and projected onto the main screen.