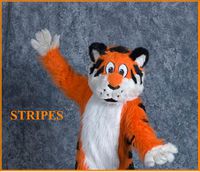 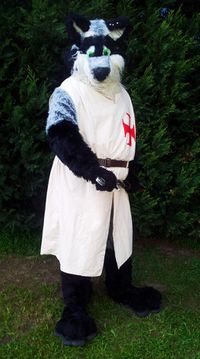 Stripes collects plushies. He enjoys animation both old and new, his favorites range from Kimba the White Lion to computer-generated animations such as the Madagascar movies. He also enjoys online comics (mostly non-yiff).

Stripes is a railway buff, coming from a fourth generation rail family. He is involved with 5-inch gauge miniature railways and enjoys the miniature engineering, machining and welding that goes into making his own locos. Photography is also a favorite past time, with the railways featuring heavily.

Stripes enjoys fursuiting, which he starting doing with a friend in the late 1990s. In February, 2009, he obtained his own "Stripes" fursuit.

Around a year later, he purchased another suit, this time from the United States. This suit is a hybrid wolf/raccoon named Racky.