The storyline of Jay Naylor's comic Better Days (2003-2009) follows approximately 25 years of fictional history in the lives (including romances, tragedies, triumphs and quandaries) of Fisk and Lucy Black, two Georgia-born cats, and their family and friends. 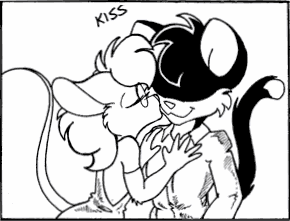 The Black twins, Lucy and Fisk, and their mother Sheila

The following is not to be considered serious or at all accurate. What follows is a collection of visual clues seen in the comic throughout its run so far and was assembled into a rough timeline.

When taken into consideration, the following trivia can be assumed:

With research done, this could be the most accurate timeline (year, age of the Black twins):