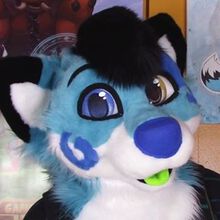 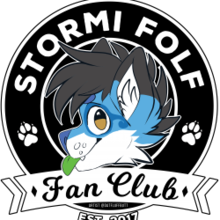 Stormi Folf, also referred to as Stormi the Folf or simply as Stormi, is a fursuiter and YouTuber who lives in Mississippi, USA. Stormi is a transgender woman, having previously identified as non-binary; she started HRT on 2 June 2021. She is pansexual and they use she/they pronouns.[1]

Stormi's fursona is a blue and white folf. (A hybrid between a wolf and a fox). The primary color of her design is bright blue. she features green highlights via their paws, tongue, and the transfer between the blue and white fur on their legs. Her hair is black, as is the trim of her ears. A defining feature of Stormi the Folf's design is the darker blue spirals across her face. Stormi received her fursuit in May 2017, which she showed off in her first published YouTube video.[2] Her fursuit was made by Splinter Fox Productions. In May 2020, Stormi revealed her second fursuit, which was made by Thunderhowl Studios.[3]

Stormi the Folf launched their YouTube channel in May 2017 when they received their first, and current, fursuit. Her first video published on May 21, 2017, was a recording of her wearing her fursuit for the first time.[2]

Like a lot of furry YouTubers, Stormi the Folf mainly makes content of an informative nature to the furry fandom. Their most viewed video, published on the 8th of September 2018, is on the topic of: "FURSONAS: Unique and Uncommon types!" with over 277,000 views as of June 2022.[4]

Stormi was the Guest of Honor at Emerald's Fur Summit 2018, held in Pensacola, Florida, USA. Stormi was also one of the Guests of Honor at Tails and Tornadoes Fur Con 2019.[7]