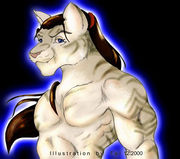 Steeleheart's fursona was a "Cataldi", a timber wolf-Siberian tiger hybrid.[4]

Steeleheart attended Further Confusion quite often, and uploaded photos of the convention to his personal website called "Furry Haven".

In October of 2013, Steeleheart was diagnosed with Stage IV colon cancer which had metastasized into his liver.[5] Though Steeleheart had said his condition was "going good" in late 2015, he passed away in January of 2016.

Steeleheart, along with Growly, was arrested in 2001 and charged for multiple crimes after the pair performed sex acts on a 14-year-old boy and photographed the acts.[6]