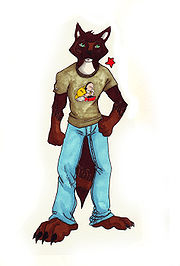 Starpaw (born November 4th, 1984) is a furry who lives in Hull, United Kingdom. His fursona is a folf.

Starpaw is one of several Hull Furs and occasionally attends furmeets organised by the NorthernFurs. Although he has been a part of the fandom for several years, he only started meeting furs in real life in December 2006. His first NorthernFurs meet was in York, United Kingdom, which took place on 24th February 2007.

Starpaw is a folf (a Wolf-fox hybrid) with dark brown fur and white stomach fur. His most noticeable feature is the chocolate brown strip of fur across the top of his eyes which then curls down into spirals on both of his cheeks. This fur also extends down his muzzle from his brow. His white chest fur is outlined by a thin strip of the same chocolate coloured fur extending up to his face in another set of smaller swirls. As well as distinctive tear drop markings on his muzzle he also sports swirls from his 'gloves' and 'socks'. His right nipple is pierced.

Outside the fandom Starpaw is interested in live music and is a freelance music journalist. He has worked voluntarily for many magazines in the past including On In Hull and the regional music magazine, Sandman.

His most recent work is working for the local 'street' and lifestyle magazine Tenfoot City where he writes the music section, interviewing the bands and artists that make up the Hull music scene.

He enjoys travelling and has visited Spain, Germany and Sweden.

Starpaw produced the conbook for the 2007 RBW event in London.