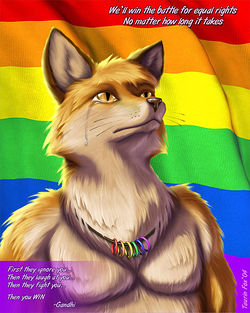 Standing Proud is a well known piece of furry art created by Taurin Fox in 2004. It depicts his character, a male anthro fox wearing pride rings, with a tear running down his cheek, with a rainbow flag behind him, and with a Gandhi quote about passive resistance.

Although some have thought it was intended as an anti-fursecution piece, Standing Proud was actually meant[1] to be a statement about what he considers to be the dire state of gay rights in the US.

It was inspired by the 2004 election results, which not only saw the re-election of George W. Bush, who had been backing an amendment to the United States Constitution which would ban gay marriage, but also saw eleven states approve (through referendum) amendments to their state constitutions in order to ban gay people from marrying.

Due in part to its popularity, this piece of art has been subject to misrepresentation, parody, photoshopping, and ridicule.