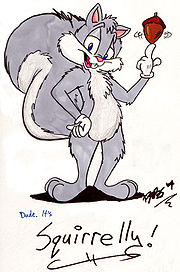 Squirrelly (real name Jamie S. Wilmoth), is a furry fan from Ohio, Michigan, USA, who has been a member of various MUCKs since June 25, 1992. His first Internet access actually started back in 1991, with alt.tv.tiny-toons.

Squirrelly was introduced to FurryMUCK by a friend from the Tiny Toons news group, he quickly picked up on the furry fandom, joining MU*s including RealmsMUCK, DruidMUCK, WizardMUCK (which later became The Den),[1] Unbridled Desires, FurToonia, and Tapestries.

He became a wizard on some and provided MUF code for many others. Some of his more well known MUFs are the newer version of action.muf (the 'hug' command and such) and the MeetMe program.

Squirrelly's fursona is a toony grey squirrel with a Warner Bros. style.