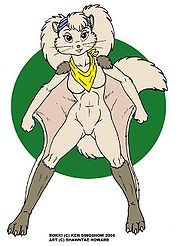 A squirrel is a small omnivorous rodent, and are members of the family Sciuridae, a family that includes small or medium-size rodents. The squirrel family includes tree squirrels, ground squirrels, chipmunks, marmots (including groundhogs), flying squirrels, and prairie dogs amongst other rodents. Squirrels are indigenous to the Americas, Eurasia, and Africa, and were introduced by humans to Australia.

For many people, the type of squirrel that first comes to mind is a tree squirrel. Affectionately called "tree rats" by some in the furry fandom for their arboreal lifestyle, its most distinctive feature is its long, bushy tail.

Some examples from popular culture are Hammy from the movie Over the Hedge, Sandy Cheeks from SpongeBob SquarePants, and Rocky from Rocky and Bullwinkle. Other characters include Scrat, who is a saber-toothed squirrel from the Ice Age movies. A few more include:

A well-known example of a squirrel in the furry fandom is Eric W. Schwartz's character Amy the Squirrel.