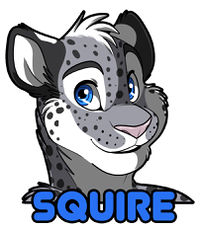 Squire, aka SquireAsh, (born October 23, 1975) is a furry artist and fursuiter.[1] He resides in Horwich, in Greater Manchester, England, where he lives with Adcro, to whom he has been married (via civil partnership) since 2009. They have been together since 2002.

Squire's fursona is a snow leopard.

Squire's artistic methods focus primarily on pencil work, with some occasional inked and computer-coloured works. In more recent times[when?] he has started practicing with more traditional means of artwork, such as acrylic paints on canvas board.[2] His work can occasionally be seen submitted to the ArtJam on The Funday Pawpet Show.