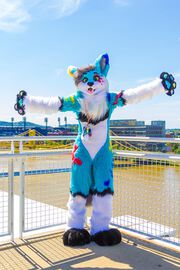 Splat Fennec (born January 19), is a fursuiter, a fursuit maker and live streamer who lives in Phoenix, Arizona, USA.[1] Since April 2017, Splat has been engaged to her mate, Omnom Nomnomnom. Splat's main fursona is a Fennec Fox. She also has a sciurus named Camber (closed species by Omnom, suit made by herself), a squennec (fennec/ sciurus offspring, suit made by Skypro Fursuits), a Savannah cat and a pink and blue housecat made by Frosst Fursuits and refurbished by her.