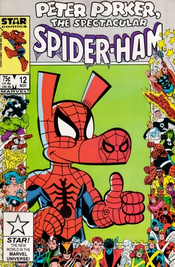 His first appearance was in the 1983 one-shot humor comic book Marvel Tails Starring Peter Porker, the Spectacular Spider-Ham #1, which was then followed by an ongoing bimonthly series, Peter Porker, the Spectacular Spider-Ham. The series lasted 17 issues, all of which were published under Marvel's Star Comics imprint. The character primarily exists on Earth-8311, which was a universe populated by other anthropomorphic animal parody versions of Marvel superheroes and supervillains.[1]

Spider-Ham was born a spider who lived in May Porker's basement, but her hair drying invention went wrong, and was bitten by her, transforming him into an anthropomorphic pig himself, although still with the abilities of a spider. It's never established whether he is still a spider with the limitations of a pig or a pig with the proportionate strength and agility of a spider. 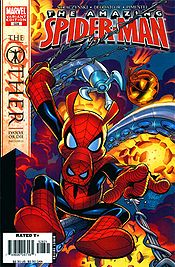 The Spider-Ham series also included back up strips featuring such characters as Deerdevil (Daredevil), Goose Rider (Ghost Rider) and the Fantastic Fur (the Fantastic Four).

Some of these back-ups were contradictory, presenting different anthropomorphic versions of characters in different stories, such as two Namor counterparts: the Sub-Merchandizer (a dog) and the Sub-Marsupial (possibly an opossum).

The character faded into cult status, alongside other funny animal super-heroes, such as DC's Captain Carrot and His Amazing Zoo Crew. Until recently, the Marvel crew decided to give Spider-Ham another chance.

Returning triumphantly in 2005 by popular demand in a poll in variant cover art for Amazing Spider-Man #528 by artists Mike Wieringo and Karl Kesel, Spider-Man Family #1 featured a sixteen-page Spider-Girl story, in which May Parker (Peter Parker's daughter) watches a DVD showing a small portion of a fictional Spider-Ham animated series, discovering that it was created by one of Spider-Man's enemies, Jack O'Lantern. Also in the issue, there was a reprint of Marvel Tails #1.

In the 2019 comic, Amazing Spider-Man: Full Circle, Spider-Ham, along with Bombastic Bag-Ham and his symbiote suit are also featured.