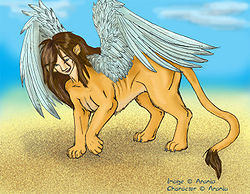 A portrait of a sphinx by Arania
A Sphinx is a mythological chimera creature that is usually depicted as a lion with the head of a woman. While the most famous example comes from Egyptian mythology, sphinxes have also appeared in Greek mythology. Sphinxes are commonly found in some areas of the fandom, especially in taur and nonmorphic furry artists, such as Roy D. Pounds II and Arania.

The sphinxes of Egypt are mythical creatures, often depicted as guardians. They often have varying heads of animals, such as rams and falcons. The largest and most famous sphinx is the Great Sphinx of Giza in Egypt. While the sphinx has origins in Egypt, the name itself is Greek.

Sphinxes only appear once in Greek mythology. The Sphinx was a daughter of Echidna and of Typhon She sat in front of the city Thebes where she would ask each passerby history's most famous riddle:

If anyone failed to answer, she would strangle them. The word "sphinx" comes from the Greek word sphigx meaning "to strangle." The famous Oedipus solved the riddle: man who crawls on all fours as a baby, then walks on two feet as an adult, and walks with a cane in old age. The Sphinx, defeated, threw herself from her rock in fury and died.

Sphinxes by other names have appeared in many other cultures, including the Shri Narasimha, an avatar of Lord Vishnu, a Hindu deity whose purpose is to destroy evil on earth. Early artistic depictions of "sphinxes" from the South Asian subcontinent often show Greek influence. However, in far eastern Asia, there are sphinxes that show independent development.