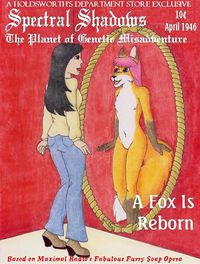 Illustration of a fictional comic book from the 1940s advertising the fictional Spectral Shadows radio program.

The main plot concerns a family of feral deer who travel time and space in the service of cosmic deities, taking the story into many different settings that involve various types of anthropomorphic characters and concepts.

Begun in the 70's under the influence of progressive rock, new age philosophies and a desire to create something in the genre of Felix Salten, Richard Adams and Richard Bach with a strong sci-fi twist, Spectral Shadows maintains a connection to those roots and attempts to project serious allegorical ideas, even in the midst of the most outlandish situations.

Originally planned as a series of 34 novels, the net serial version has the background concept of an old time radio show from the 1940s that was composed of 34 serials, from which only episodes from serials 1 and 11 have survived. These are the episodes that appear on the web site. Everything else is considered lost.

Since 2005, Serial 11, The Planet Of Genetic Misadventure has been the main focus of the project. This serial concerns the exploration of a planet called Cygnus, inhabited by a single species of human/animal hybrids resulting from genetic warfare. On this planet are 50 towns, each supporting a unique religion, most based on some aspect of literature or entertainment.

Spectral Shadows: The Planet of Genetic Misadventure was on the 2010 Recommended Anthropomorphics List.[1]