Sparkster is a 16-bit generation side scrolling platform game which features anthropomorphic animals. It was produced and released in 1994 by Konami for the Super Famicom/Super Nintendo Entertainment System]], and directed by Hideo Ueda. It is a different game to the Mega Drive version, which bore the full title Sparkster: Rocket Knight Adventures 2, and has no plot continuity with the original Rocket Knight Adventures for the Mega Drive.

The kingdom of Eginasem, a land inhabited by opossums, is under attack by the Lioness's army of yellow dog soldiers, which also kidnapped Princess Flora. Sparkster, the Rocket Knight, is out to battle this threat, rescue the princess, and save his kingdom from certain destruction. His nemesis, the rival Rocket Knight Axel Gear, is aiding the invading forces, making Sparkster's task even more dangerous. The player's goal is to battle through all of the enemy warriors and robots, defeat Axel Gear, and infiltrate the enemy's battleship, where the yellow dogs' leader, Generalissimo Lioness, is planning to launch a warhead to destroy planet Eginasem. 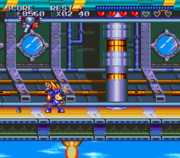 The eponymous main character is an opossum knight who fights an army of yellow wolves and robots. He is armed with a sword that can fire energy bolts, and a rocket pack that allows him to fly short distances. The gameplay remains mostly the same as in Mega Drive games. One major difference is that the game's final level depends on a difficulty level that the player has selected. On easy, the game culminates with battle against Axel Gear, but on normal, the story continues with Sparkster fighting the leader of the Wolves on the next level. On hard difficulty, the game continues beyond that, with the true final stage.