Sparkle Kreations LLC is a fursuit making company that started in 2011.

Sparkle Kreations' main founder, Karma Ai, discovered the furry fandom and fursuits in 2006. He went on to make his first fursuit in early 2007, which he wore around his local community. Soon after, he began to make more personal suits for himself and friends, and then began to take commissions for customized fursuits.

In 2009, another member joined what would become the Sparkle Kreations crew, when Karma Ai met Ryo-Aki, and the two began to engage in a relationship. Ryo-Aki had a fascination with crafts and costumes all his life, and was very eager to begin working alongside Karma. In 2011, the pair officially opened up for business as Sparkle Kreations.

The mascots of Sparkle Kreations are Sparkle and Cirque, and they often make appearances at U.S. furry conventions and local Denver, Colorado, events. 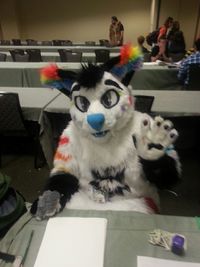 Sparkle of Sparkle Kreations sits behind an Artist Alley table at FWA 2013 and sketches in fursuit.

Sparkle is a rainbow saber-tooth hybrid that loves to dance and have fun. His specific breed is a combination of smilodon, lynx, cheetah, and tiger. This combination is reflected in his physical appearance; he has saber-teeth and a small tail, long tufted ears, spots, and stripes.

Originally created in Spring of 2011, the first fursuit version did not appear until November 2011. A second version appeared briefly at Furry Weekend Atlanta 2012, but was quickly discarded due to rushed work. The third version was created in October/November 2012, and made its final appearance at Rocky Mountain Fur Con 2013. The fourth version was the most popular, and appeared at many of the other conventions listed. The fifth version is currently in the works, and hopes to debut at BLFC 2016. Sparkle is most known for his LED light system, which causes most of his costume to light up, mostly in the rainbow markings.

Cirque is a circus-themed husky that loves to juggle, do contortion, be an acrobat, and generally enjoys circus-related acts. His markings reflect a vibrant and colorful circus, and his name mimics that of 'Cirque Du Soleil', a favorite circus of his.

Originally created in Fall of 2012, the first fursuit version did not appear until July 2013 at AnthroCon. The second version appeared shortly after at RMFC 2013, lasting until Spring 2015, when the third version appeared at BLFC 2015. The fourth version is not currently in the works yet.