Southern Comfurt (misspelling intentional) was an early iteration of Savannimals that ran furry events and friendly gatherings from early 2009 to 2011 between Savannah, GA and Hilton Head Island, SC. It dissolved when core members J.Tigerclaw, Katalina, and Blue Hayze moved away, and Savannimals was founded in its place by Toraie. 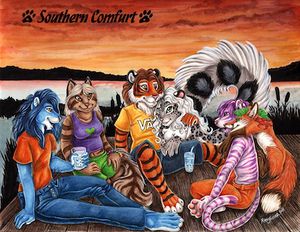 Southern Comfurt was not created on a specific date; rather, it was agreed upon by members Fen-Fen and Katalina that the group should have some form of communication and organization. Hence, the group (and subsequently the forum) was created as way for local furs to identify themselves, arrange meets and socialize with other.