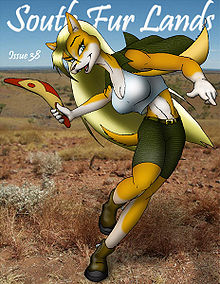 South Fur Lands is a fanzine published roughly quarterly by Bernard Doove. It has an emphasis on Southern Hemisphere furs, with Australia, South Africa, and South America represented in the content.

South Fur Lands was initially published in 1995 by Jason Gaffney, Simon Raboczi and Marko the Rat. Bernard became the sole publisher from issue 20, in 2001, though other furs still occasionally help out. Each issue is assembled at a collating party by Bernard and furs who decide to lend a hand. The number of furs who come to these collations range from twelve to sometimes zero. South Fur Lands is available for purchase through the internet at the South Fur Lands homepage or at Second Ed Mailorder. It is also sold at furry conventions.

Five issues were published each year: the four quarterly issues with generally M-rated furry content, and one annual "Sex and Violence" adults-only issue.

On December 17, 2006, South Fur Lands held a "Binding Party" at MiDFur, where awards were presented for different categories of plushies (the event's theme). When MiDFur became a convention as of MiDFur X, the binding party became a regular event until MiDFur 13.

Due to rising costs, falling sales, and lack of interest in contributing, South Fur Lands ceased production from issue #57 (December 2011). However, the majority of the copies were collated and bound at MiDFur 13 in January 2012. All issues remain available through print-on-demand.

The South Fur Lands website was designed by Silverblue and is hosted by Ch'marr.