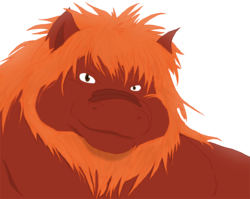 Sosh Dragon (formerly Soshimo Junai) is a furry artist with a dragon fursona, originally from Cardiff in South Wales, currently living in Urmston, England.[1] He has a particular affinity for technology and the sciences, as well as in his own words "anything with an engine in it".

Sosh's artwork typically depicts fatfurs, which was the subject which first brought him into the furry fandom.

Sosh's fursona is a large red dragon with an orange mane of fur, which covers his back, tail and chest, as well as having two streaks down either arm. The character is 6ft 10in (208cm) tall and weighs 440 pounds (200kg). He additionally has large wings, as large as his body, and small pointed ears.[2]

Sosh used to have alternate forms, including a taur version of himself and a grey nonmorphic husky, however they have fallen into disuse and are no longer considered part of the character.

Sosh's first convention was ConFuzzled 2012. He hopes to be able to attend ConFuzzled again in 2013, as well as Scotiacon later in the same year. As of 2022, he is the nightclub lead for ConFuzzled.[1]